From the Archives. The following article first appeared on TrinityMemphis.org in 2009. 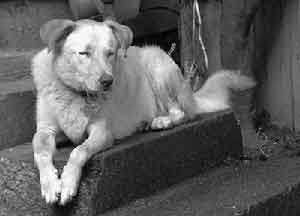 Our sweet dog Lili got a fungal infection when she was young and had to have her eyes removed.

When my daughters were young, we adopted a small Yellow Lab named Lili from the Humane Society. All of the kids in the neighborhood loved Lili. When we went on family walks, she would sit politely and wag her tail as children hugged and tugged and climbed on her. They could step on her paws or her tail and she never complained.

One summer she developed Blastomycosis, a rare infection that comes from breathing in fungus spores. In order to save her, we had to have her eyes removed. Now we had to become accustomed to life with a blind dog. Dogs are amazing creatures with keen memories and a terrific ability to adapt.

When Lili came back home, we returned her to the backyard where she haltingly found her way around. She learned from the change in texture that she was in a flowerbed thus near the fence. She memorized where trees and posts were and where her food and water was. Within days, it seemed, she was running back and forth at full speed, missing all kinds of obstacles while playing with our other dog.

Lili also continued with us on our family walks. She learned the command “step down” meant that she was to step down off of a curb and the command “step up” meant to step up onto the curb. The command “careful” was a warning to slow down and proceed carefully, to not pull hard on the leash and scamper ahead as she always want to do.

This little dog was amazing to watch. She quickly memorized the route that we would take, and memorized where the curbs were. I have no idea how she knew, but as we approached a street corner, she always knew when to turn. 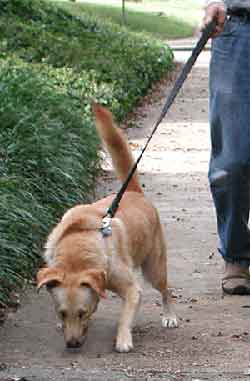 In spite of her blindness, our fearless Lili was always wanted to run ahead of us. She had memorized where the street curbs were but not the lamp posts.

Evenings walks were a marvel. The little dog became quite independent and was obviously proud of herself. The only things that she had difficulties with were street signs and lamp posts. Because we always guided her around these, she never learned where they were. All she knew was that suddenly we were pulling her leash and holding her back. If she pushed on ahead, we pulled back even harder and occasionally had to give the leash a smart jerk to stop her in her tracks. Because she didn’t see the danger, she didn’t realize that we were protecting her. She would turn around and face us as if to say, “Just tell me what you want.”

As I walked with Lili, I began to think about my relationship with God. God is all-seeing, I am not. God guides me and watches over me but I don’t see Him. I also don’t see the dangers around me that He can see. I am prone to thinking that God isn’t all that active in my life, He’s doing important “God” stuff. I fall into thinking that I am doing it on my own or sometimes find myself resentful of God for the times that He doesn’t let me wander where I want or He doesn’t take me where I want to go. On more than one occasion, He has had to give my leash a sharp jerk to get my attention or to pull me back from danger.

I talked to Lili, but other than simple commands, she couldn’t understand what I was saying. She knew a few word commands and understood the tone of my voice, but that was it. Likewise, my understanding of what God is saying to me is limited. I perk up my ears, but I can’t understand what He is telling me. St. Paul described it as looking into a cloudy mirror. God is speaking to us clearly, but in our sinful state, we can only understand bits and pieces of what He is saying—like looking in a cloudy mirror. This must be very frustrating for God as well as me. After all, it wasn’t God that messed up the perfect relation that He had with us.

The difference between Lili and me is that one day I will see God face to face. I will hear Him with perfect hearing and I will, at last, fully understand what He is saying to me. Until that time, I have to be content walking by His side, taking comfort in the love and the safety He provides, and trusting that He is always looking out for me.
_______________