Getting Angry With God

From the Archives. The following article first appeared on TrinityMemphis.org in 2009.

Sometimes I Get Angry With God.

Yes, I get angry with God.

My mother had six sisters and two brothers. Each one married. This gave me lots and lots of aunts and uncles and cousins. Jack was my favorite uncle by far. Jack was everyone’s favorite. In my mother’s family, he was the baby. Today he died of cancer. What started out as a small skin cancer spread to his lymph glands and in a short time, it did him in. We will be going to Missouri to bury him this weekend. 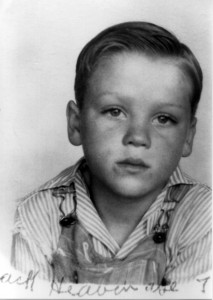 David’s Uncle Jack Haven. This is his school picture as a boy of 7

It was the same when my Uncle Rick suffered a brain aneurism. He left a wife and two small children. We prayed for God to spare his life. The answer was, “No.”

Many, many times, I have approached God and ask for his Divine intervention. “Just make the suffering go away.” Sometimes he says yes, but many more times, the answer is … “No.”

In my sinful state, I think: Why can’t God just say yes? It’s really no skin off of His nose to grant us this one tiny petition. I bargain, I plead. I pray without ceasing. I mean, what’s it take for God to add a few more years to the life to one mortal? What about that “Call upon Me in the day of trouble; I will deliver you and you shall glorify Me.” Huh? (Psalm 50:15)

Why can’t God just say yes? It’s really no skin off of His nose to grant us this one tiny petition. I bargain, I plead. I pray without ceasing. I mean, what’s it take for God to add a few more years to the life to one mortal?.

At the edge of my Uncle Jack’s farm is a deep limestone cave. Jack would take my cousins and me exploring in it sometimes. I remember once as a kid on our way out of the cave, I got wedged in a tight spot. I started to panic. There were so many of us it was likely that I wouldn’t be missed. The others didn’t see me and continued on. As the lights moved away, the solid darkness swallowed me up. I cried out in terror. Jack came back with the light and surveyed my situation. But he didn’t pull me out. He told me how to swing my leg and twist my body to get myself unstuck. I protested. I needed a heroic rescue—not advice. Jack just chuckled and insisted that I free myself, which I eventually did. But it wasn’t what I wanted. I wanted him to pick me up in his strong arms and carry me to the mouth of the cave. But Jack wanted me to man up. He wanted me to act my age and learn that I could get myself out of a jamb.

In the Hebrew, the word trouble that the Psalmists used, literally translates to tight spot. The Psalmists was saying that when you get into a tight spot, call out. But call out for what? I’ve been calling out. Where is MY deliverance?

Scholars say that the word deliver appears more than 260 times in the English translation of the Old Testament, but only five times, including its use in this verse, is it translated from the Hebrew word that means: equip for a fight, strengthen, to draw out.

So what, then is God’s promise through the Psalmists? Just this. God knows we live in a world of sin, a world of sickness and suffering and death. There is no attempt to spread the suffering evenly. There’s not attempt to make it fair, or evenhanded. Even that is part of the sinful condition that we must live in. Some suffer a lot, some only a little, and sometimes we have to watch while others suffer, powerless to do anything to help.

God does not promise to make it all go away (He will, but not just yet). He promises that He will give us the strength to endure. But this is little comfort to me when I am deep in grief. Like a frustrated child, I lash out against God because I didn’t get my way.

God just smiles. He knows me. He knows that in spite of my anger, I still love him, just as He still loves me. He doesn’t want these bad things to happen, but they must.

He rocks me in his arms and comforts me. I may sulk a while, but little by little the anger goes away. I am just a child. I can’t understand why bad things must happen. I simply have to accept it. In time, I tell God I’m sorry for getting angry.

He pats my head and tells me, it’s okay. I’m still his child, and my sins are still forgiven.

And He reminds me of His promise. Some day, this will all go away, and I will be with all of my aunts and uncles again but with no sickness, no suffering, and no sadness… ever again.