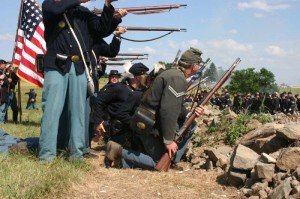 Civil War buffs re-enact the Battle of Gettysburg on the 150th Anniversary of the historic battle.

Monday marked the 150 anniversary of the Battle of Gettysburg, the pivotal battle of the American Civil War. This past weekend, thousands of re-enactors assembled in Gettysburg to re-enact the three-day battle in exacting detail (minus the death and bloodshed), and to join with thousands more  in marking the historic occasion.

Schumacher Hall, known as the “Old Dorm’ served has headquarters, lookout, and hospital during the Battle of Gettysburg. It was also the home to the building steward, his wife and five of his children, who were caught inside.

Playing a pivotal role in the event was Schmucker Hall, a stately ediface on the campus of the Lutheran Theological Seminary at Gettysburg. Schumacher Hall, originally served as dormitory, classrooms, and caretakers housing. Emanuel Ziegler, the steward for the seminary, his wife and five of his six children, found themselves trapped in the middle of the deadliest battle in American history.

“My father was steward and my mother matron of this institution…and I was one of five children at home at that time…We succeeded in getting back to our home [the Seminary], but it was in use as a hospital, all the space in the large building was filled up with wounded soldiers. The doctors in charge, learning it was our home, cleared two of the rooms and we moved in and got busy helping care for the wounded. My mother took charge of the kitchen and did the cooking…hailed by the wounded and others connected with the hospital as mother.” Hugh M. Ziegler,1933

“The injury done to the property of this Institution is considerable. The house I occupy was most damaged…Thirteen cannonballs or shells pierced the walls, & made holes several of which were from 2 to 3 feet in length & nearly as broad; window frames were shattered to pieces, sash broken & the great part of the glass in the house destroyed…The Seminary edifice was perforated by several balls, & large portions knocked out of the N. East gable corner. There being also a crack in the wall extending over two stories…” – The Rev. S. S. Schmucker, 1863 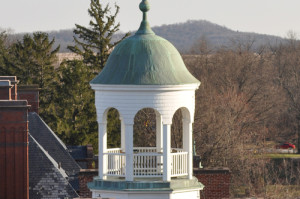 Union forces, under Gen. John Buford, used Schmucker Hall’s cupola to survey the battlefield. The building was also used as his headquarters and later served as field hospital. 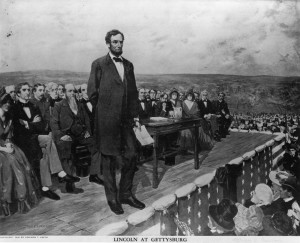 President Lincoln spoke briefly at the dedication ceremony setting aside part of the battleground as a military cemetery. Library Of Congress/Getty Images)

The Battle of Gettysburg was a decisive victory for the Union that stopped the Confederate invasion of the North and forced Lee’s army to withdraw to Virginia. Although the battle did not involve the largest number of troops it had the highest casualties of any battle of the Civil War.

It is considered a turning point because for the rest of the war General Lee was on the defensive. From here he was forced into a war of attrition  and eventually cornered in an unwinnable siege at Richmond.

Four and a half months after the battle, part of the battlefield was dedicated as a military cemetery. It was then that President Lincoln gave his Gettysburg Address.

The Lutheran Theological Seminary at Gettysburg has joined with the Adams County Historical Society to create the Seminary Ridge Museum, housed in Schmucker Hall. It opens July 1, 2013.