Atheist’s to meet the Peabody ducks. 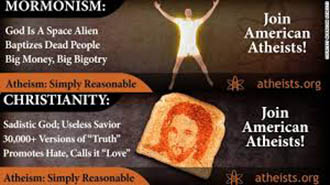 This spring, the American Atheists’ will host their 41st Annual Convention in Memphis at the Peabody hotel. It is my hope and prayer that they will come and go without anyone noticing. It would be wonderful if no one came to picket, to preach, or in any other way give the news media cause to give them publicity. I seriously doubt that this will be possible.

I confess to being somewhat amused by atheists, the vocal ones at least and those that try and convert them. They amuse me by their behavior. These atheist cannot be content denying the risen Christ and keeping it to themselves. They feel the need to announce their disbelief to any and all who will listen. My well-meaning Christian brethren forget Jesus’ admonition, “Do not give what is holy to the dogs; nor cast your pearls before swine, lest they trample them under their feet, and turn and tear you in pieces.” (Mat 7:6)

Atheists insist on proselytizing to believers, using their understanding of science, reason, and logic. Christians are powerless to fight back, at least not using the same methods. Reciting bible verses to atheists is folly. The gospel holds no authority to those who do not recognize it as the holy word of God. Getting into the mud with them and debating science or logic is what they live for. Christians cannot win in this arena. There is no logic to Christianity. To outsiders, Christianity makes no sense. Saint Paul says as much in a letter to the Christians in Corinth. This is what he wrote:

“For the message of the cross is foolishness to those who are perishing, but to us who are being saved it is the power of God. For it is written: ‘I will destroy the wisdom of the wise; the intelligence of the intelligent I will frustrate.’

Where is the wise person? Where is the teacher of the law? Where is the philosopher of this age? Has not God made foolish the wisdom of the world? For since in the wisdom of God the world through its wisdom did not know him, God was pleased through the foolishness of what was preached to save those who believe. Jews demand signs and Greeks look for wisdom, but we preach Christ crucified: a stumbling block to Jews and foolishness to Gentiles, but to those whom God has called, both Jews and Greeks, Christ the power of God and the wisdom of God. For the foolishness of God is wiser than human wisdom, and the weakness of God is stronger than human strength.

Brothers and sisters, think of what you were when you were called. Not many of you were wise by human standards; not many were influential; not many were of noble birth. But God chose the foolish things of the world to shame the wise; God chose the weak things of the world to shame the strong. God chose the lowly things of this world and the despised things—and the things that are not—to nullify the things that are, so that no one may boast before him. It is because of him that you are in Christ Jesus, who has become for us wisdom from God—that is, our righteousness, holiness and redemption. Therefore, as it is written: ‘Let the one who boasts boast in the Lord.’

So you may ask, “Are we to stand idly by as our God is mocked and these people bring damnation on themselves?” The answer is no, we do not sit idle. We pray. One thing every atheist has in common is their rejection of the Holy Spirit. And so we pray.

We beseech our Heavenly Father to send his Holy Spirit again, with the hope that some of them will, like Saul, have the scales fall from their eyes. We pray that they are able to stand up and see just who the fools have been. We pray that with the renewed effort of the Holy Spirit, they will welcome Christ Jesus into their hearts.