A Few Notes About Pastor’s Call

This past Sunday, Pastor Hatcher surprised most of us with the announcement that he had received a Divine Call to Trinity Lutheran Church in St. Louis, and that he and his family had visited with them and was now prayerfully considering the call. News of this was upsetting to many in the congregation and led to much discussion and many questions. I thought it might be helpful to say a few words about the Divine Call, what it is and how it works in the Lutheran Church.

Update: On Sunday, July 12, 2015, Pastor Hatcher announced to the congregation that after much prayer and meditation, that he had declined the call to Trinity Lutheran Church-St. Louis.

The shepherd is used throughout the Bible as an example of Jesus’s relationship with the children of God. A shepherd protects his flock against enemies. He cares for them when they are hurt or sick. He locates lost or strayed sheep and guides them back to the flock. He keeps order and harmony in the flock, and provides them with water and nourishment.

God established the Office of the Holy Ministry to serve a congregation in the same way that a shepherd (and Jesus) watches over his flock. The Latin word for shepherd is pastor.

In Scriptures, some shepherds were appointed by God directly, such as when He called Abraham or the Apostle Paul. Others He appointed indirectly, such as when He selected a replacement for Judas. The book of Acts tells us that the apostles and disciples gathered in a room and prayed. They then selected two potential candidates as replacements and prayed to God, “You, O Lord, who know the hearts of all, show which of these two you have chosen to take part in this ministry and apostleship from which Judas by transgression fell, that he might go to his own place.” They then selected Matthias and asked him to serve as the twelfth apostle. (Acts 1:12-26)

Thousands of years later, we still select our pastors in much the same way. A list of candidates are drawn up and with prayerful consideration, the list is narrowed down to just a few. These names are then presented to the congregation who asks the Holy Spirit to guide them in selecting a candidate to call to be their pastor. Often times this involves inviting the candidate to visit them so that the candidate and the congregation may get to know one another better. 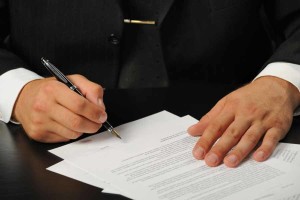 After selecting a candidate, the congregation will sign a Call document inviting him to come and server as their pastor.

On receiving the Call, the candidate prays for Holy Spirit to guide them in deciding whether to accept the Call or to decline it. You might ask why, if the Holy Spirit directed a congregation to call a certain person to be their pastor, is it necessary for him to decide if he should take the call or not? Isn’t the Holy Spirit ordering him, in effect, to go and serve a new congregation?

The answer is no. God uses the call process for means other than simply moving a pastor from congregation to congregation. These other means are a mystery, most often known only to God. For instance, there are times when disharmony may find its way into a congregation. Perhaps the pastor was wishing for a new flock to lead or perhaps some members of the congregation desired a new shepherd. A call issued to the pastor can be like a bucket of ice water. The shock allows the Holy Spirit to enter into a troubled congregation and bring about harmony. 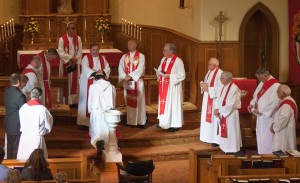 Pastor Hatcher accepted Trinity’s Call. At his installation service, the Lutheran clergy in the area came together and one by one laid their hands on him and blessed him.

Sometimes it works the other way. Perhaps a congregation, upon having their call declined, is led to a more personal introspection and finds areas for improvement. Other times, it gives the congregation an opportunity to widen its search and open itself to opportunities to take their ministries into new areas.

Whatever the reason, it remains a holy mystery. The one thing to bear in mind is that all decisions are made in very human way and for very human reasons. And yet, it is God who directs all things. Whatever is to be, it is in God’s hands. Romans 8:28.

David Brugge is a longtime member of Trinity where he serves as Elder. He is an author, teacher, and frequent contributor to Trinitymemphis.org.