Filled with the Spirit

This article was taken from the South East of Victoria Lake Diocese website. See the article at http://elct-selvd.org/filled-with-the-spirit/
This was it! All the months of planning, packing, and fund-raising, all the hours and days of travel, all the prayers and Bible studies, emails, and meetings were over. It was really here, we were ready to start. 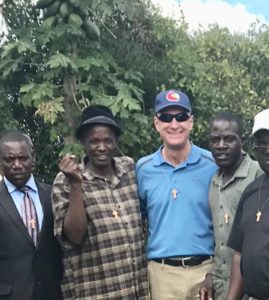 We weren’t visiting another church, school, or mission outpost. We weren’t signing a guest book, admiring the fruits of a grant or donation, we were entering the mission field and Satan was working overtime, plaguing my thoughts with doubts, fears, worry, and apprehension. What was I doing? I wasn’t an evangelist, I wasn’t a pastor and I certainly wasn’t an apostle. And, wait, I seemed to remember all the things that happened to those people – beatings, ship-wrecks, stoning, jail time, and all sorts of major persecution. I felt we could rule out the ship wrecks – people were walking miles just to secure a bucket of water, but I certainly saw plenty of rocks. In fact, I felt plenty of rocks, my fit bit registered over 8000 steps before we even left the vehicle!

Everyone else seemed so confident, smiling, laughing, and re-connecting with the pastors and evangelists from past trips. And the other team from CTK had been so successful, they had baptized nearly 600 during their week. What if we were rejected, what if no one listened or cared about the Gospel message? I felt like the shy, quiet, little girl that had attended a two-room Lutheran grade school up in the middle of cornfields in Northwest Iowa. Yet, here we were, ready to start.

After dividing up into teams, determining the direction we would go, meeting our local guide, and feeling hopelessly confused as the Swahili flew back and forth at a furious pace, we set off. “Hodi, hodi, “was called out as we entered a compound. Wait, what was this? A group of young men, not the women, children, and babies I was expecting. They welcomed us to join their group perched on stumps and branches in the shade of an acacia tree. Terry noticed one man wearing a KC Chiefs pullover. He mentioned that was where he grew up. This broke the ice and everyone laughed. Terry pulled out the evangecube and started telling the story. Everyone was leaning forward, listening intently as Silas interpreted. They kept stopping us to ask questions, they wanted to know more and more. Soon, Terry had pulled out his bowl, filled it with water, and the entire group was baptized! Was this really happening? 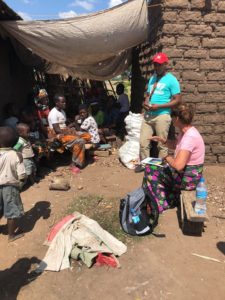 As we worked, another man walked by and stopped to listen. Would we please come over to his boma as soon as possible? We hurried across the path. An impossible number of children were swarming about his legs – sons, daughters, nieces, and nephews – ready to be baptized. I learned how to say God Bless You, My Friend in halting Swahili – “Mungu akubariki, rafiki yangu,” as I placed crosses around each new Christian’s neck. As we turned to leave, Joshua, one of the new Christians from the first group that had been brimming with questions, came running up. “I have more, come quickly!” he exclaimed. Joshua couldn’t keep this Good News to himself, he had been on the phone spreading the Good News to everyone he knew. This, in itself, was a miracle. He had an old flip phone and he had taken it apart. If he held it just so, the battery connected and he could place a call. Silas, our evangelist, explained that most people tried to save their minutes and wanted others to call them, so they would text someone and wait for them to call back. Joshua was using up his minutes with reckless abandon. 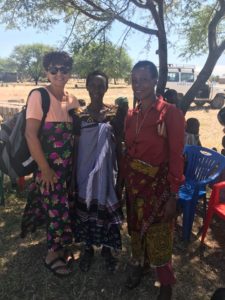 We followed Joshua about a half a mile through the fields of cotton, sunflowers, and corn. Each hill had been hand-planted, and it would also be harvested by hand. Every grain of rice, kernel of corn, and boll of cotton was precious. We got to the next compound and Joshua had them primed and ready for us. He sat through the story again, adding questions and explanations as we went along. Halfway through, an older gentleman suddenly stood up and threw his lighter on the ground. He didn’t want “any other gods”! When it was his turn to be baptized, he struggled with removing his witch doctor charms, but, finally agreed. Then, he asked Terry what his father’s name was. Well, Leroy, wasn’t going to cut it, so soon his new Christian name was Terry. As we tried to leave, no one wanted us to go. Joshua wanted pictures which, considering the state of his phone, would have to be shared at the local sub parish. 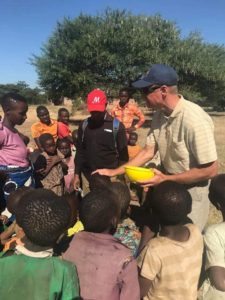 Newly baptized Terry wanted us to come into his boma and Pastor Grayson finally had to take Terry’s hand and gently lead him away since we knew the other teams would be waiting back at the land rovers and we had a long walk back. Even as we started back, voices came through the thicket imploring us to stay and eat with them.

Were we ready to share the Gospel? No, we weren’t, but the Holy Spirit had other plans.

“When the people heard this, they were cut to the heart and said…, “Brothers, what shall we do?” …“Repent and be baptized, every one of you, …. The promise is for you and your children and for all who are far off – for all whom the Lord our God will call.” Acts 3:38-40

On Sunday, June 24, 2018, Pastor Tieman gave Trinity a presentation about Tanzania and the trip. You can view the slideshow below: 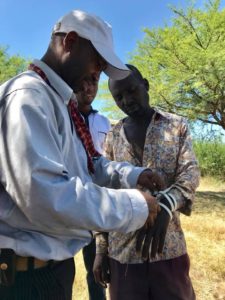